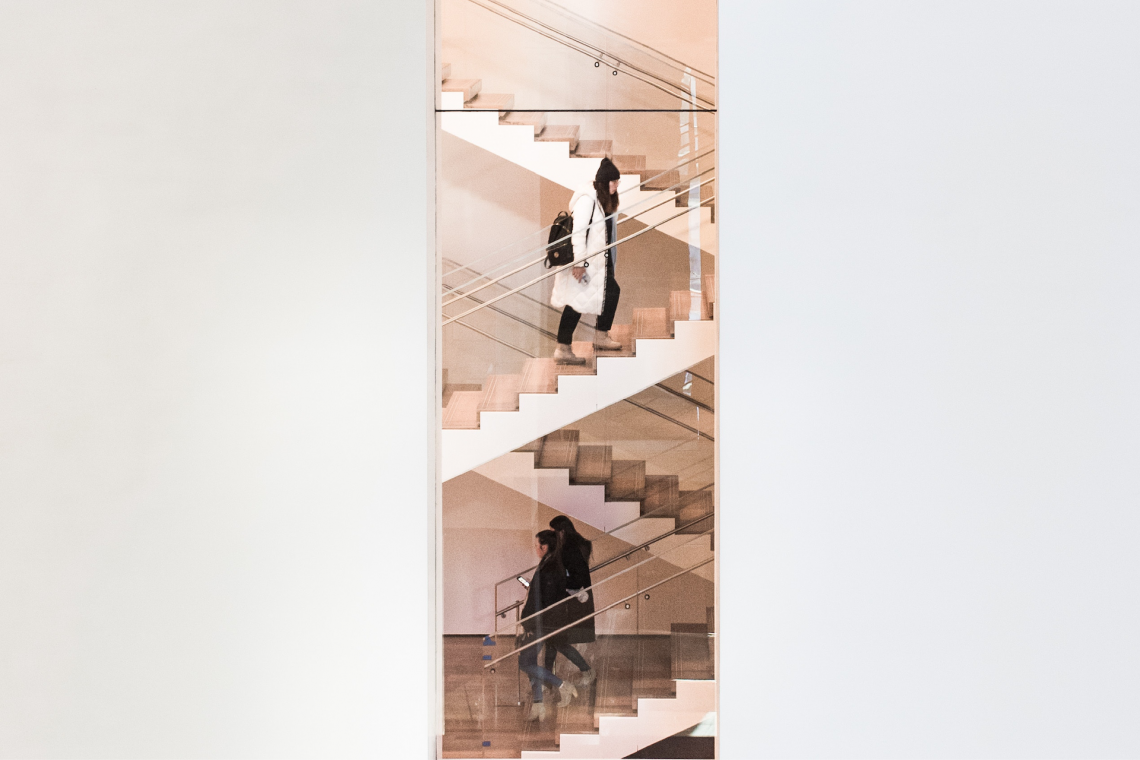 Our customer, The University of Melbourne (UoM) is Victoria’s oldest university, and is ranked among the world’s top 50 globally. Despite this impressive reputation, there is an acknowledgement that the education sector is competitive, requiring constant innovation.

Within the University, the Business Services team responsible for new IT development was driven by a gradual but strong realisation of the role they could play in helping UoM maintain a strong customer focus, increase responsiveness, increase visibility and transparency across teams, and have greater awareness of delivering value sooner.

As a group the Business Services team felt siloed, with people moving around a lot, and believed that if they could shift their culture to be more team-centred, then this would create a better culture in their workplace.

Additionally, there was the need to reduce risk and cost in terms of running IT. The feeling was that if they could improve quality across the board, that this would improve productivity, a factor ultimately tied to return on investment and dollars saved. 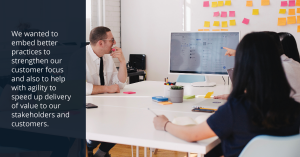 “We wanted to change the way that we worked and the way that we interacted with each other,” says Liam Whelan, Transformation Lead at UoM. “We didn’t anticipate a crisis moment, but we knew that we had a number of fundamental challenges to resolve.”

“We wanted to embed better practices to strengthen our customer focus and also to help with agility to speed up delivery of value to our stakeholders and customers. We believed that agile might be an effective alternative method for us. After a review of several consultancies, we selected Elabor8 to assist us.”

“The University is a unique organisation, quite different to a corporate business. As one of Elabor8’s key propositions is pragmatism, we were confident they could tailor their approach to really create a fit-for-purpose approach.”

Over the next 21 months Elabor8 assisted UoM to implement an Adaptive Ways of Working (AWOW) initiative that eventually reached 700 people across IT and non-IT areas including finance, human resources, occupational health and safety (OHS), facilities and campus services.

The project began by selecting an ‘exemplar’ team and using an agile ‘test, learn and improve’ approach to pilot, partly as a proxy for the way the rest of the University could function, but also for their ability to demonstrate early proof of value. The exemplar was done with the ServiceNow team that administered and developed the University’s ServiceNow platform. 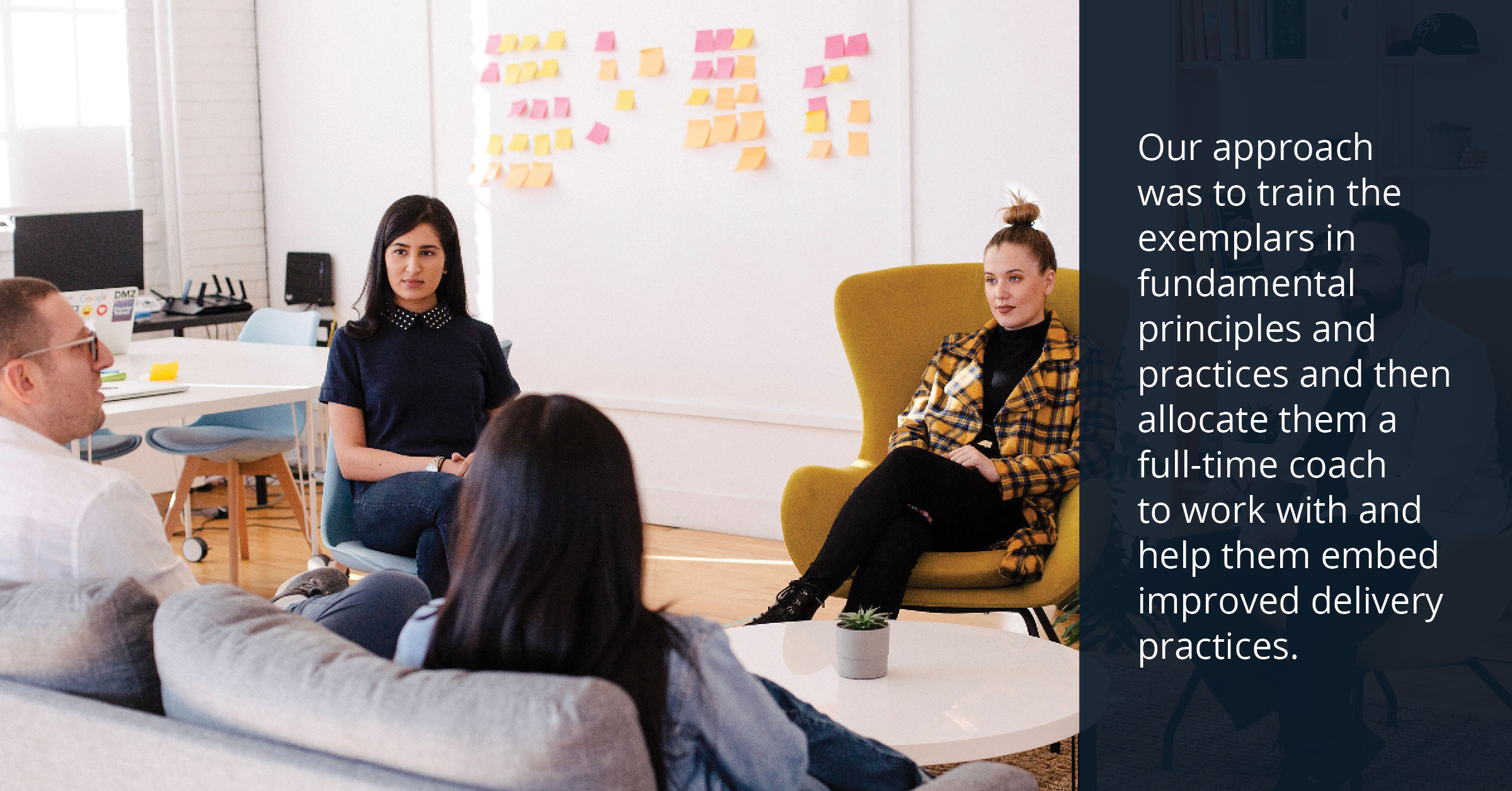 “We looked at a range of opportunities across the University within the IT space and selected one that had a good mix of people working on defect-related enhancements, with project work going into the team as well,” said Whelan.

“We started with exemplars. We picked a couple of teams in the third quarter of 2018 and partnered with them. Our approach was to train them in fundamental principles and practices and then allocate them a full-time coach to work with and help them embed improved delivery practices.”

“We accepted that some of the legacy of our 168-year-old history persists in our organisational structure, so we would need to carefully consider what we could change to avoid unplanned impacts. But we knew that with Elabor8’s help, our ways of working could be modernised.” 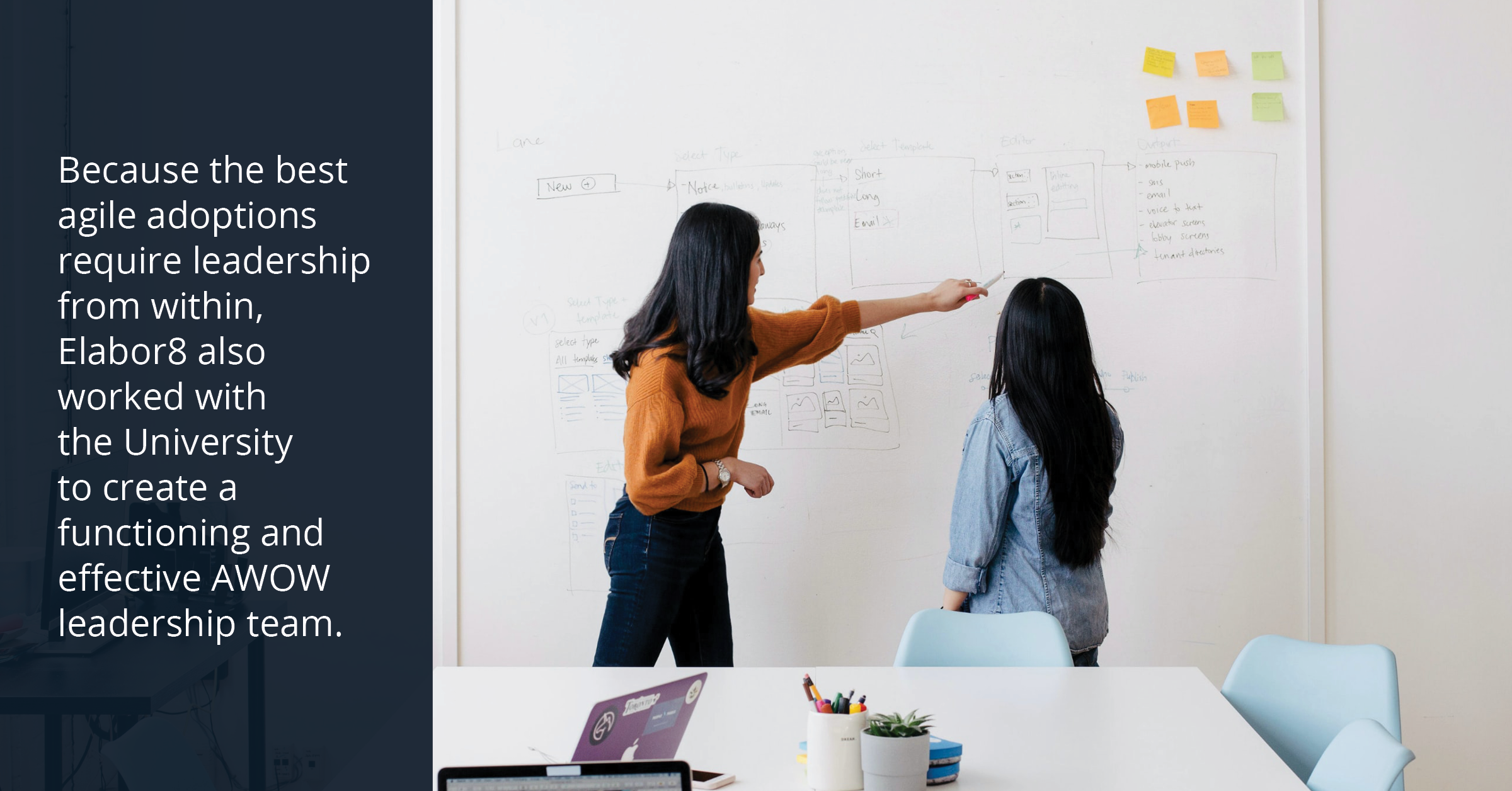 During the run phase where the AWOW program was rolled out to a further 70 teams, Elabor8 established and taught team practices and cadence, with coaching in agile behaviours. They worked with programs and teams on backlog value, flow of work items and efficiency. Data metrics were captured and analysed, with team health checks and an agility assessment.

“Because the best agile adoptions require leadership from within, Elabor8 also worked with the University to create a functioning and effective AWOW leadership team. This team led the transition, with Elabor8 supporting them to help establish and bolster their purpose, value-based backlog of work and operating rhythm.”

The team established an effective data-driven approach to test the operating model hypothesis. Data was used to prove success and drive improvement. This approach was split into three parts, with part one customer-centred, focusing on what the teams were working on, to determine if this performance added value. Part two was centred around understanding how much work was being performed, and how regularly. Part three was focused on engagement and alignment through regular team health checks.

The benefits of AWOW were evident university-wide. There was a 208% productivity increase in the overall throughput of work, with teams delivering a third more valuable work. Moreover, quality improvement through reduction of defect/technical tasks rates rose by more than a quarter (25%).

“The results were undeniable. Not only were the teams who were part of the initiative more productive, but the quality and value of work they performed improved. This was due to overall better prioritisation eliminating at least 30% of low or no value work before it even reached the delivery teams.” 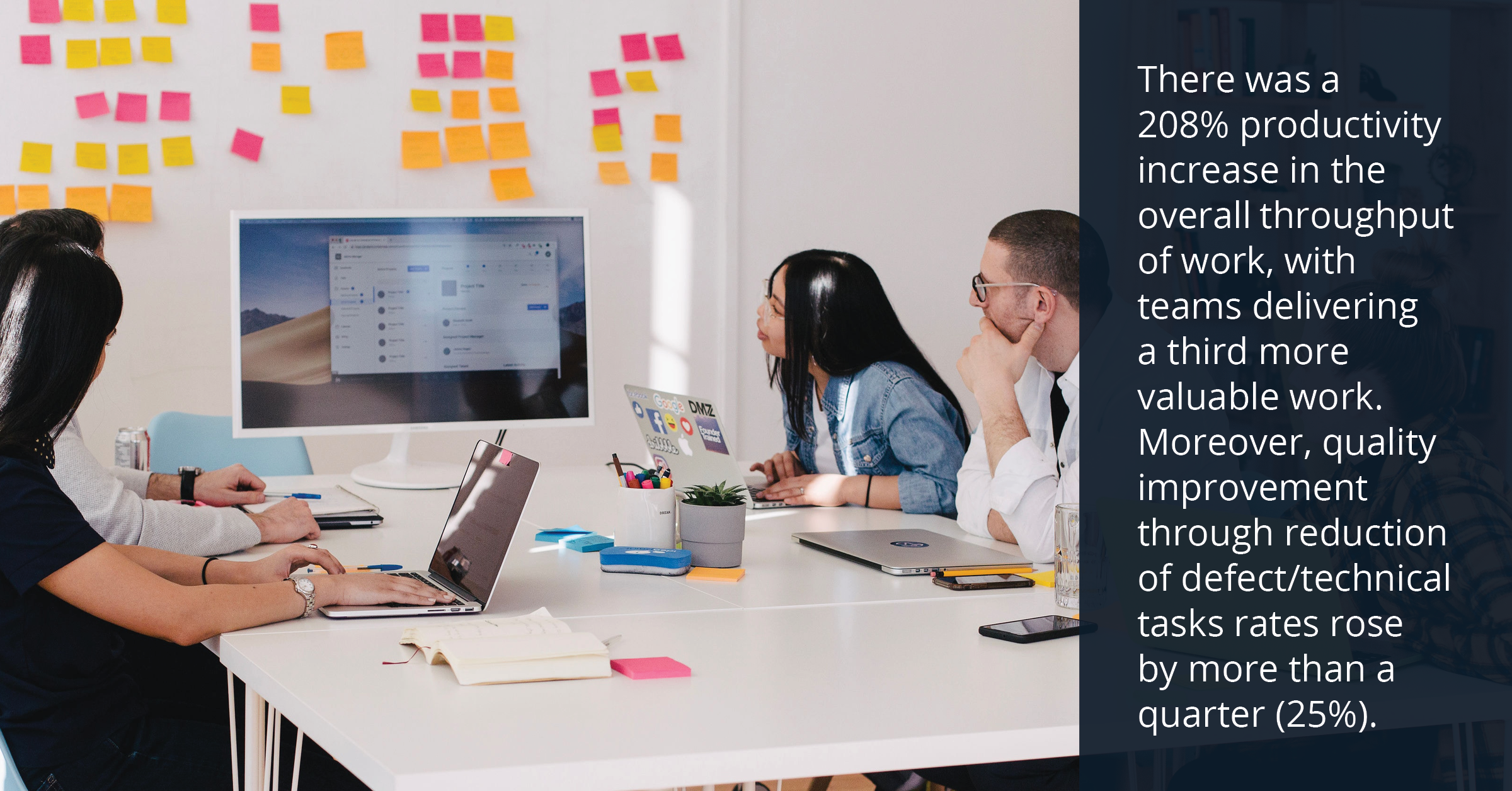 “The highlights for me were that Elabor8 were able to help us focus on embedding metrics within teams, and it had quite an impact. Some of the numbers we saw were definitely made the case for change.”

Just as significant to the University was the impact of the initiative on the culture. AWOW improved team engagement by 15%, with team alignment rising by 18%.

“What we were striving for ultimately was not just different approaches to achieving speed in delivery, but actually tackling the perceptions that people had about the way they performed, too – a shift in mindset. Elabor8 were vital to the breakthrough that we had with our teams,” says Whelan.

To understand what work was being performed, Elabor8 focused on measuring how much work the teams were completing, and how regularly. An increase of throughput comparing pre and post AWOW of 102% was recorded. The second and third releases after exemplar one was initiated, recorded the most ever items in a release(s) for ServiceNow. 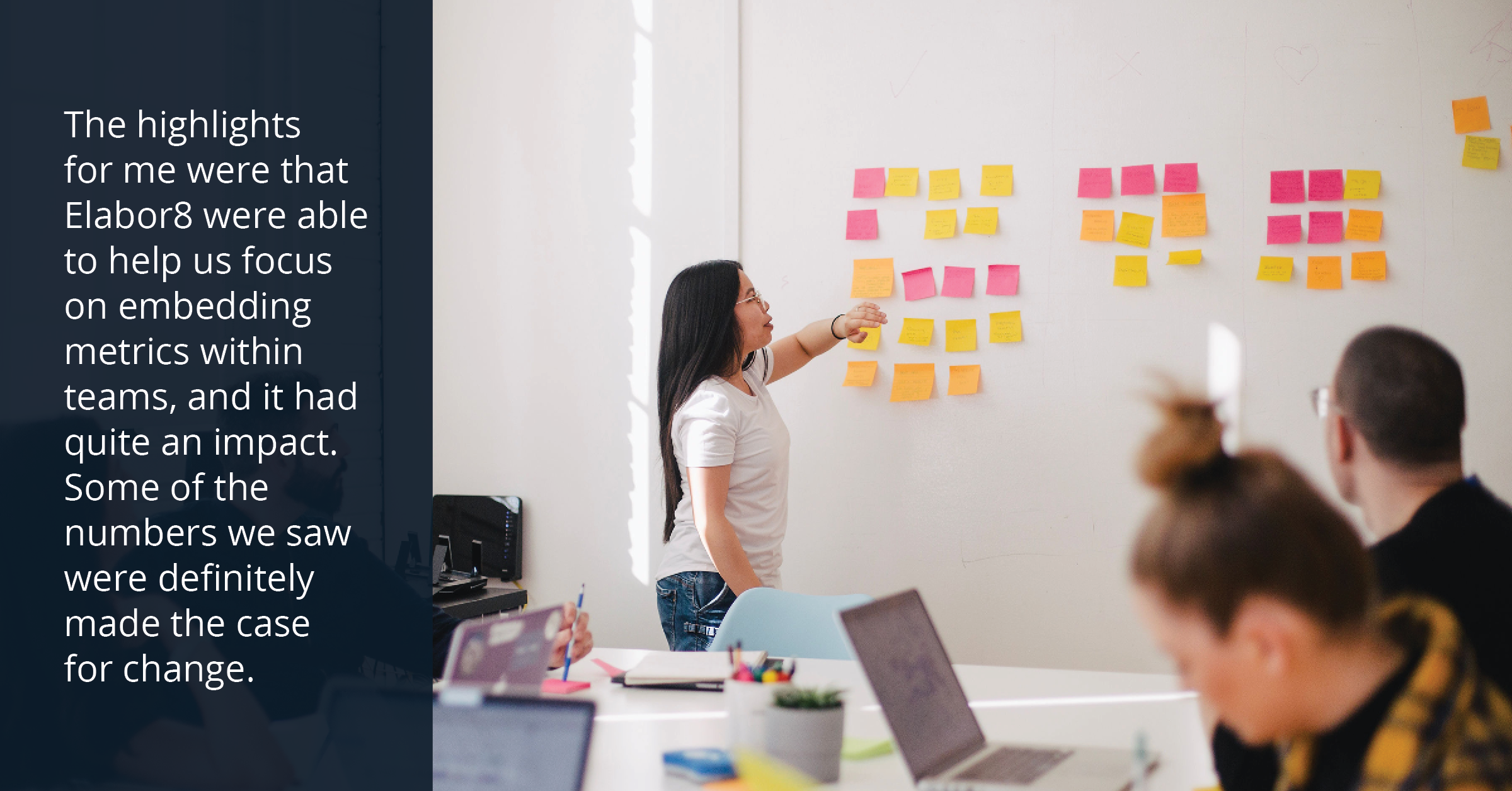 To understand how engaged the team was, Elabor8 focused on measuring team engagement and alignment through regular team health checks. A positive 31% increase in their understanding of why they exist was recorded.

Scaling the approach across teams in IT and non-IT areas, Elabor8 coaches established and launched over 70 AWOW teams, using the same methods taken in building the exemplar team. They trained over 619 employees in over 31 agile courses, which added value in terms of establishing a common knowledge base. By partnering with the AWOW leadership team that Elabor8 developed, new portfolios, programs and cross functional teams were identified.

“It was pleasing to see improvement across business services at scale. Because of Elabor8’s support for a bottom-up approach to transformation – foundations were set before considering anything else – there are plans to continue collaboratively building a fit-for-purpose Agile Operating Model for the University’s delivery teams when COVID-19’s restrictions are lifted.”

Traditionally, innovation and organisational agile transformation has been seen as something for only software and IT areas, but the success that the UoM has seen in a non-IT area has its potential in a wider context.

“Ideally the university would like to see this grow across faculties, schools and into other operational areas within the COO Portfolio and possibly even for discussion with Chancellery at some point. I feel it’s something that the University can use to provide value across all of these areas and it has been exciting to be in the position to influence where we can go next,” says Whelan.