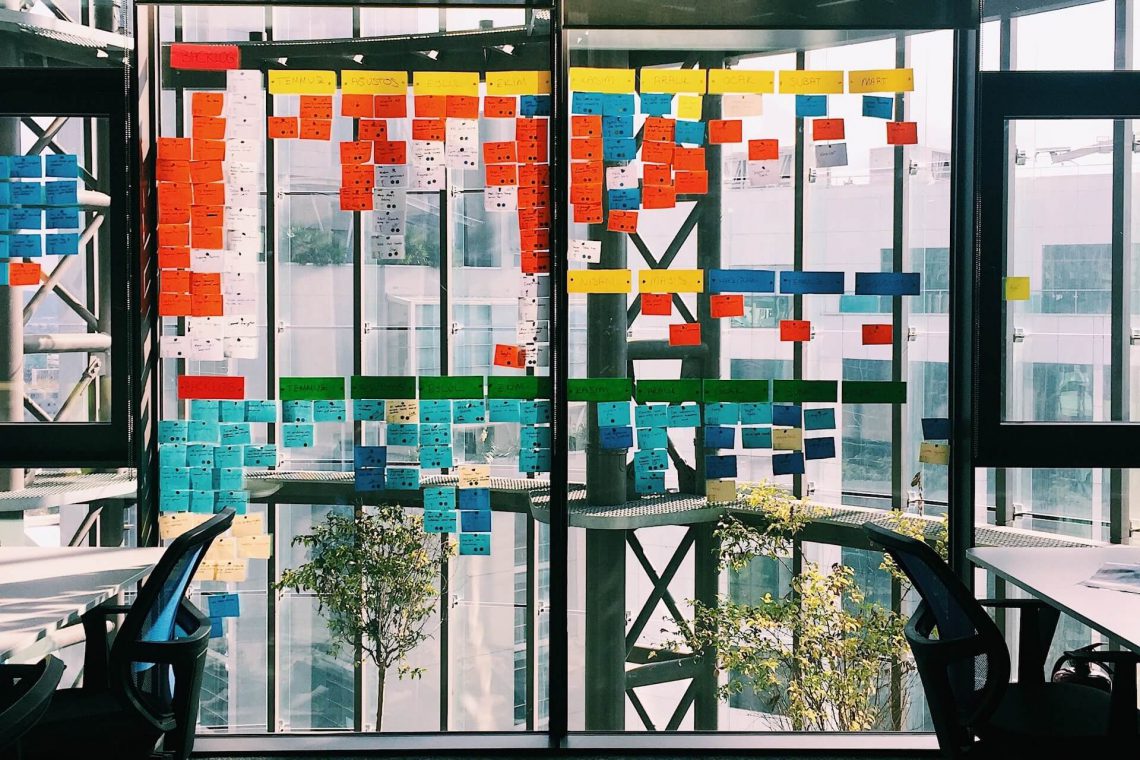 When forming your new Agile team, one of the many decisions to make is how to set up your Story Wall. You can try lots of variations – including different columns, techniques, and/or approaches. But how do you decide? Here are some ideas to get you started.*

1.  What columns to choose from?

With Story Walls, there’s no end of columns you can use. However, most walls start with the very basics, such as:

This might be enough for your Story Wall, as long as everyone understands the definition of “Done” –  that is, what criteria needs to be met before the Story Card can be claimed as Done.

I’ve found teams generally need a level of maturity to regularly communicate to each other a Story Card’s status. They often don’t need a Column as a visual indicator that highlights this. However, some teams prefer to add in more columns to visually indicate Story Card status. So below is a list of columns I’ve seen and an attempted definition for each:

Using some of the columns explained above, I thought it might also be useful to visualise below how Story Cards would flow through a Story Wall. However, there is more to Story Walls than just columns.

Story Walls allow you to have columns representing work status at any given time, but you can also use rows. These are sometimes referred to as Swimlanes and I’ve seen two different approaches for their use:

You can see some examples of both ways to use rows below.

Example of a Story Wall split by Streams 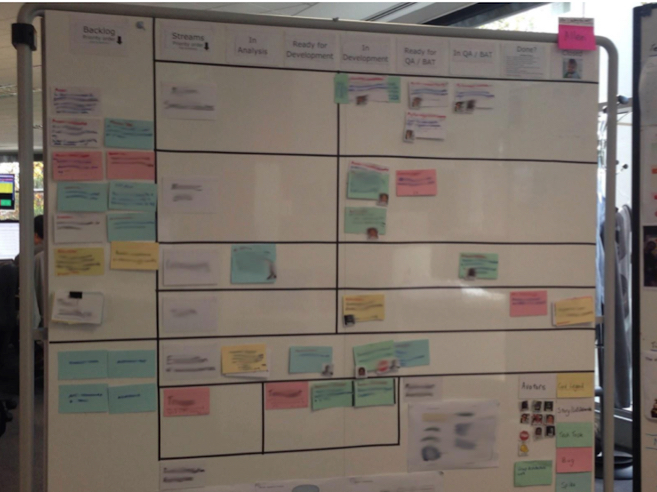 Examples of Story Walls with rows to highlight status 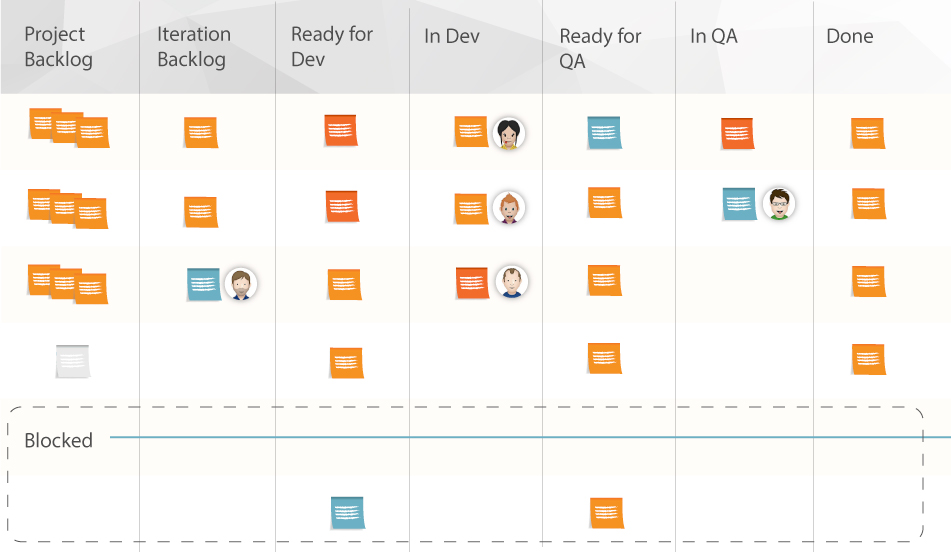 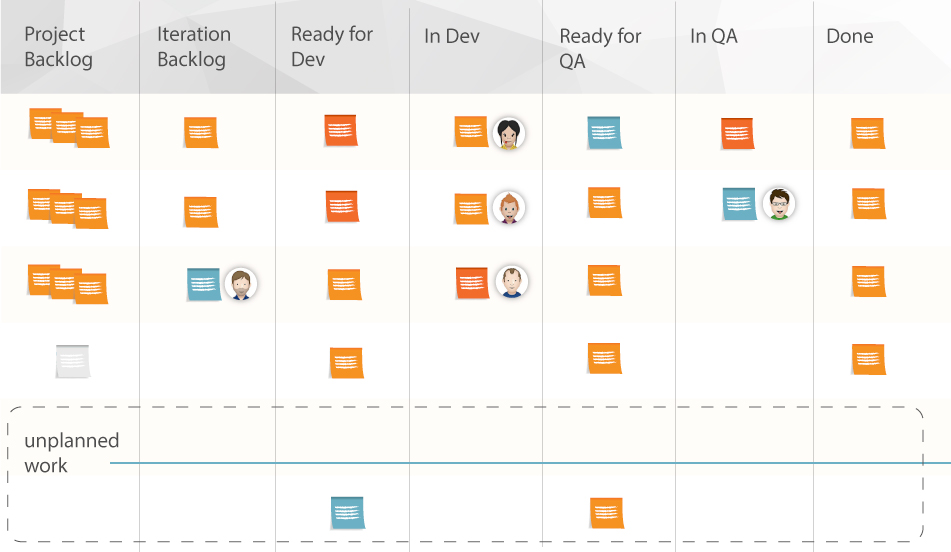 What are avatars and how can they be used on a story wall?

Avatars are primarily used to identify who’s currently working on a Story Card. You can see them in action above. From experience, I’ve found it works best to design these types of Avatars with the following attributes:

Some team members can be a bit hesitant about having their photo on the Story Wall, or just want to have a bit of fun and pick a theme. This can work as well, as long as their name is on the avatar. Personally, I prefer having a real picture but the bottom line is whatever you use has to be accepted by the entire team.

Below are examples I’ve used in the past. On one particular project, we had a lot of fun designing our avatars. Our faces were photoshopped onto the same famous Australian media person who ended up being our team mascot. The crazy things you come up with on projects! Can you guess who it is?

Avatars can also be used to highlight a Story Card’s status – the most common being the Blocker avatar. However, your team can use avatars flexibly to represent whatever status they feel is appropriate for a Story Card.

4.  How coloured story cards can represent different types of work

OK, you’ve decided on the structure of your Story Wall. Now you can consider whether you want to use different colours to represent different types of Story Cards.

The most common colours are: Red, Blue, Green, Yellow, and White (generally because everyone orders their Story Cards from the same stationary company). While you’re free to use whatever colours you want, I’d still like to provide some suggestions (and there’s an example below as well):

Example of a Story Wall with different coloured Story Cards 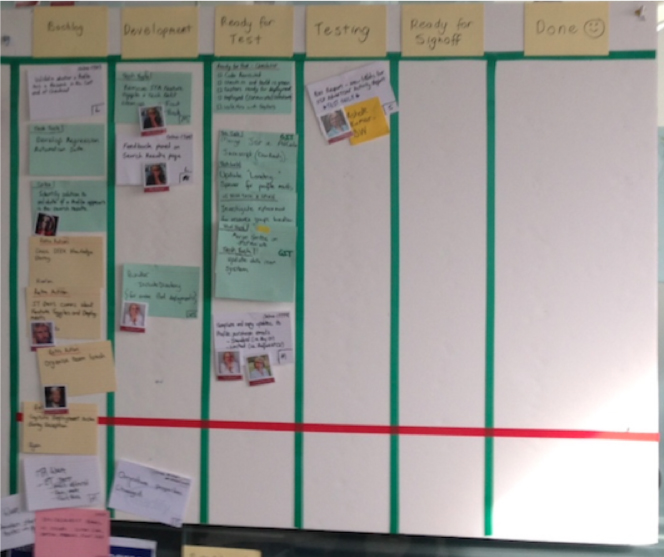 You could even add a Legend or a Key next to your Story Wall so everyone understands what each card represents. But this raises another point – should you use a physical or electronic board?

Before considering how you set up your Story Wall, you’ll need to decide whether to have a physical or electronic wall (i.e JIRA, Trello, RallyDev, etc.).

I always recommend a physical wall (I learned this the hard way from a failed attempt at only using an electronic wall for a co-located team). However, rather than making a sweeping statement without proper evidence, I’d like to back this up by providing a summary of the pros and cons for each alternative.

Note: Another consideration is whether you have a co-located team or distributed team. I’ll add comments on this for both.

You might have noticed I’ve alluded to the possibility to having a dual physical and electronic wall. I’ve used this for both co-located and distributed teams.

Co-located teams that want benefits that come with an electronic wall (i.e. detailed documentation), I’d suggest configuring it to store documentation without the need to update which column a Story Card is in. Your physical wall can then be the primary source of project truth.

Distributed teams might be best served by duplicating their Story Wall in both physical and electronic formats. I believe the benefits of having a tangible board backed up by an electronic wall far outweigh the cons of duplicating effort across both boards.

This does mean you get all the benefits and negatives of both approaches, but I’ve found it helps people to understand and know how Story Cards are progressing. This option requires a bit of diligence from the team to keep the two Story Walls in sync, however, it ensures everyone is always on the same page.

As you can see, there’s a lot to consider for your Story Wall. I think the best approach is to decide what options will work best for your team’s needs.

Most importantly, whether you try some or all of the elements I’ve suggested or go with your own ideas, give it a go. If you find something isn’t working, don’t be afraid to change how your wall works. In my latest team, we altered our Story Wall multiple times over the course of six months. We didn’t want to be stuck in a process we had defined if it wasn’t working for us. So, pick out what you think you’ll need as a team and try it out!

There are a number of other resources out there with great suggestions on how to set up your Story Wall. Here’s a short list to take a look at:

* To clarify, the ideas I’m suggesting here are predominantly based on both XP and Kanban approaches because this is where my experience lies. For example, Scrum is somewhat different – Story Cards can be broken down into Task levels. Here I assume that Story Cards don’t need to be broken down further.